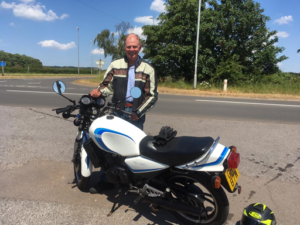 Hi Everyone, I hope that you may be able to relate with my experiences and get an understanding of living with a pouch.

My names Martin Medland. I’m sixty years young! I’ve had a pouch for twenty seven years. I was diagnosed with Colitis at the age of eighteen. I was working abroad at the time (I was in the Merchant Navy) and flown home. I went into Salisbury Hospital for five days whilst they treated me. I lived with colitis for fifteen years, during which time I was able to continue working. I had flare ups which were controlled with steroids, enemas and other tablets. Due to losing too much blood, I underwent a blood infusion in 1992. Soon after I contracted hepatitis and spent three weeks in isolation in Musgrove Park Hospital. Although I underwent a liver biopsy (which hurts!) the strain of hepatitis was low enough that my liver recovered itself with no other intervention.

Unfortunately the colitis was still flaring up and medication couldn’t keep it under control. I had to undergo surgery to remove my large bowel. The operation was at Musgrove in May 1993 and was performed by Charles Collins. Just before the operation he explained to me that as I was pretty healthy (apart from the Colitis!) he wanted to do the operation in one go. No stoma bag, no reversal. Just one long operation to remove my bowel and build my pouch. All I remember is going down to the theatre around mid morning and coming round at about five o’clock with a scar from just below my rib cage to just above my manhood. I had tubes everywhere. As my digestive system had shut down (which is normal), I was being fed intravenously. I just remember that I felt like I’d been kicked by a very large horse!

I continued to convalesce, and after a number of days and tests, I was allowed to drink. Days later, solids were introduced but my digestive system wasn’t ready for it and later on I began to be sick. I had to let my stomach settle down for a few days and start the procedure again. This really knocked my confidence and I felt pretty fragile. I remember watching the news and the item was about how an old man had been murdered in his flat. It made me cry…It seemed crazy to me that at one end of the human spectrum one person took another’s life, whilst at the other I had all the wonderful nurses and specialists doing their upmost to save mine.

Second time around my stomach accepted food and peristalsis kicked into action. Now I was ready to start potty training at thirty three! Going to the loo for the first time wasn’t exactly easy. I was still raw everywhere and feeling new sensations. I was very fluid and had trouble knowing when I needed to go. Slowly this improved and the best way to describe it is like having a second bladder. I’d feel the build up of pressure and know when I needed to go to the loo. Once Mr Collins was happy with my condition, I was allowed home to convalesce. I had visits to the hospital to check on my condition. After twelve weeks I was able to return to work.

As far as medication went, I had to take tablets to help bulk up my food and I continued to take steroids, reducing the steroids on a plan so I didn’t suffer any withdrawal symptoms. I found that my skin improved. I’d suffered from acne and horrible boils through the colitis and this all cleared up. After about five years I stopped taking the ‘bulking’ tablets as I didn’t feel I needed them anymore. I had settled in to a toilet regime of going too the loo about four or five times a day. The sensation of pressure build up told me when I needed to go, but most importantly I was in control of when to go. I suffered no toilet accidents after about the first three months. I’ll be candid here because if you’re reading this, your either in the medical profession or your going through what can be hell and agony of colitis. The pain after the operation is nowhere near the pain felt with colitis. Though be prepared for smelly experiences in the bathroom and think of others that may follow you in there! I find that flushing the loo whilst I sit on it and go helps to both clean the toilet and reduce the smell. Though to be honest rather than feel embarrassed I make sure others know and I just feel great to be alive and out the other side of the colitis experience.

I eat whatever I want. Though I’d avoid really hot spicy food. I also find mushrooms and prawns hard to digest. If you eat prawns make sure you chew them onto small pieces or else you’ll be trying to pass it whole! Onions give me a bit of a griping pain too. Everyone is different and you’ll find your own way with this. I do still eat curry now and again. It’s still one of my favourite dishes.

As mentioned at the beginning. It’s twenty seven years now since the operation. My bowel has now settled into a routine. I go to the loo three times a day. Once when I get up, again at about six o’clock and then just before bed. I sleep for eight hours a night. I don’t take any medication to help my digestive system and haven’t for at least twenty years.

Would I have the operation again? Without hesitation. It allowed me to live my life to the full. As you can see from the picture I still like to ride motorbikes. I even did a skydive about fifteen years ago. Nothing leaked 😉